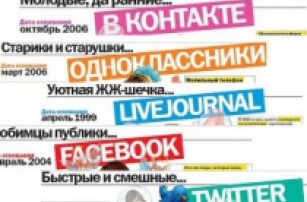 Social networks have become popular primarily due to the fact that each person can express their own position using them. Thus, having blogs or weblogs companies and users accustomed people to express their own mind and be independent.

The second category is catalogues serving as a database for science and popular information. Their second subtype is collective libraries that users create individually, loading the content.

Narrowly-specialized social networks are also very popular, such as various forums where users publish and discuss information about interesting events and help newcomers.

Commercial and corporate social networks that provide help to clients of the certain company are popular, as well. Such social networks allow getting feedback about work and company products along with providing callback with clients.

And finally, the biggest social network categories are gaming ones (for example, World of Warcraft) and communication ones (LiveJournal, Facebook, MySpace, Vkontakte, Twitter, Moj Krug etc.). The first space for blogs was the Live Journal launched in 1999, and the prototype for communication network was classmates.com portal launched in 1995.

Which social networks are the most popular among Russian Internet users?

It is interesting that social networks in Russia differ from their foreign analogues in terms of content, audience, platforms and discussion topics.

Let’s start with some statistics:

The most popular social networks among Russian Internet users:

One of the most dynamically growing networks is Twitter. In two years, the amount of Twitter users increased from 2% to 9% while other social media has been almost on the same level for previous years.

According to ComScore data for the month of April 2012, Russian Internet users spent on the average 12. 8 hours per month in social networks. Vkontakte and Odnoklassniki took most of the time – 35 and 24 minutes per month. YouTube took the third place with approximately 10 minutes per month.

This led to the first 2013-trend in social networks: guerrilla marketing was growing and developing, more and more resources were spent for working with negative.

But the amount of users logged in social networks can’t be the accurate measure for determining social media trends among Russian Internet users. There are a lot of failure SMM-projects, public pages and blogs that closed up their activity. The same can happen with user accounts.

Let’s check figures and see whether users’ behavior on Internet was changed.

Brand monitoring and social analytics system Brand Analytics has accumulated over 1 billion messages of Russian social networks users only for a month. About 7 million posts, messages and comments per day are published by Russian Internet users. This is about 200 million per month. Let’s carry out more detailed platform analysis where the maximum amount of user content is published.

Correlation of the number of daily public messages between sources is the following (excluding private talks):

The average amount of unique authors who publish messages in social networks daily (authors of posts and comments):

Consequently, on average one author publishes approximately two messages on Vkontakte, 6 messages on LiveJournal and about 7-8 messages per day on Twitter.

Although, Twitter primarily is the platform for famous people, it substantially keeps grounds. It is obvious that the amount of Twitter messages and accounts will be increasing next years. The Twitter’s ability to integrate between various social media is also the result of this trend. For example, your posts can be automatically published on Twitter from LiveJournal.

But such Twitter popularity doesn’t overrun Vkontakte. A lot of Russian Internet users chose Vkontakte as a platform for discussions. This is entirely Russian trend. The major amount of foreign social broadcast messages is still on Twitter. By the way, Vkontakte found new trend and switch from ordinary classmates search to organizing active discussions in communities and users’ pages.

As for LiveJournal, the amount of its users has decreased from 9% to 5% for the previous three years, reported TNS Web Index. In contrast to the social media common growth, it looks scarily, but, nevertheless, the amount of LiveJournal users remains constant.

One more noticeable and sustainable trend is blog professionalization. There are still thousands of popular blogs; many of them have been successfully monetized. Due to the content amount and audience size, all of them become similar to the large-scale Internet mass media. A LiveJournal policy has played a great role in this process after its changes since previous year. LiveJournal representatives appeared in many Russian cities and the Blogger School became popular, as well. All mentioned-above factors show that social Internet media will be growing and developing engaged more and more users.