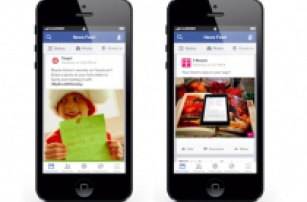 Will advertising in Facebook right column disappear in 2014? Probably, it is too early to discuss this issue, because it is beneficial for advertisers. It is a good place to create interest and generate a large income for Facebook. Nevertheless, it is clear that we are closer to the crucial moment regarding the advertisement in news announcements.

What is newsfeed advertising?

Such kind of the advertisement was implemented on Facebook in 2012 and it was efficient. According to Marin Software customer base research, advertisers increased advertising expenses for 140% in the third quarter of 2013 in comparison with the previous period.

And it is not surprising because it is working!

On the average, the advertising in Facebook news feed has 44 times higher CTR (Click-through rate) and the conversion is 5 times bigger than in banners on sites (that cost 67% more).

Due to this method, pop-ups and videos don’t distract users and the advertisement becomes a content part. The natural advertising approaches the idea, form and functioning of the network. Therefore, users pay attention on such advertisement instead of ignoring it.

In such situation, Facebook makes significant investments into the news sites advertising, letting advertisers to communicate with users through the relevant content installed in their personal feeds. Probably, the ordinary advertising on sites won’t disappear completely in 2014, but it will lose too much.

Given below are 5 main advices for efficient using of the advertising in Facebook news feed.

Put at least a half of the advertising budget in Facebook for news feed. As mentioned earlier, it will bring not only the best results in comparison with the ordinary advertising, but it will give several additional advantages, including mobile devices expansion.

Nowadays the advertising in feeds is the only one that is shown on mobile devices on Facebook. A year later, one should increase the budget for this matter more than 50% because more and more people access Facebook from smartphones.

Now more than 74% Facebook users from time to time use mobile app and the amount of users who use only mobile platform increased for 19% in the second half of 2013.

2. Choose a correct message format on the page

If your aim is to improve a conversion or sales, choose a referential advertising. If you want to increase popularity, use a photo- advertising.

According to Marin company research, the referential advertising conversion rate is 30% higher, but the photo- advertising has 23% higher CTR.

To optimize the cost of the advertisement in news feeds one should divide the target audience for several separate PC- and mobile companies instead of developing one company for all devices.

Marin analytics demonstrates that in mid-2013 the amount of advertisers targeted only for mobile companies increased for 45%. Mobile advertising in feeds is more efficient than PC’s one. Mobile advertisement CTR is 187% higher, but the price is 22% lower.

Experienced advertisers use a creative rotation in news feeds to keep the constant advertisement CTR and to make the advertising more attractive for people.

Manually updated campaigns improve efficiency, but if there a lot of them it is hard to do.

Marketing experts willing to improve their projects faster should pay attention on the automatic creative rotation controls platform on Facebook.

Perhaps, the most significant Facebook income one can get beyond the USA. Most advertisers focus on North America audience, but there are much more opportunities for global brands and international community.

85% of Facebook users live beyond North America, but expenses for the advertising in other areas of the world is only 52%.

The natural advertising came to the forefront and Facebook company that created feed content format won’t ignore it. As an advertiser, make sure that the advertising in news feeds is the most efficient.